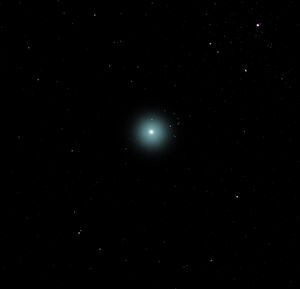 For a classification of stars see The H-R Diagram.

A white dwarf has a similar diameter with Mars, but half the mass of our sun, Sol. Found with a high frequency in the galaxy, these objects can host a planet. A Habitable Zone can exist. Good examples include Sirius B and Procyon B.

White dwarfs are remnants of dead stars. This is what will happen to Sol in the far future. When a star becomes a red giant, heavy elements accumulate in its core. The greater the star, the heavier the elements. M - type stars are unable to fuse helium and they end-up as helium white dwarfs. K - type stars are able to pass over helium, but they will get stuck at carbon. Larger, G - type stars, F - type stars and A - type stars will leave behind a white dwarf with nitrogen, oxygen, neon or slightly heavier elements. B - type stars usually are massive enough to continue the fusion cycle to iron. The enormous force developed by a red giant or a small supernova compresses the nucleus of the star so hard, that it suffers a massive implosion. As a result, the matter gets so compressed, that atoms become heavily squeezed. Majority of white dwarfs have 50% of the mass of Sol, but only the diameter of Mars! The highest mass of a white dwarf is 1.4 times the mass of Sol. Above this limit, they will degenerate into a neutron star.

As formed, a white dwarf is very hot, with its surface close to 100 000 K. Nuclear reactions no longer occur, so it will slowly cool. At such a small size, its gravitational force is huge. On its surface, matter can fall easily (this includes solar wind from a nearby star, tiny asteroids or matter from interstellar environment). This matter generates huge energy while falling, resulting X - rays. Sirius B, the most studied white dwarf, emits more X - rays then its larger companion, Sirius A. As colliding matter accumulates, it gets compressed on the surface. At some point, pressure can be high enough to ignite a nuclear fusion involving the collapsed hydrogen. At that point, deposited matter explodes, creating a nova. However, in case of carbon white dwarfs, since the point of nuclear ignition of carbon is lower, a nova might end into a supernova explosion.

Since white dwarfs are not heated by nuclear fusion, they glow as long as they are hot enough. given their small surface, it will take a lot of time until they will cool enough. In the end, there will result a cold body, named black dwarf.

Usually, white dwarfs rotate very fast (even faster than a second), generating giant magnetic fields. This can protect their planets from solar winds (from other stars) and interstellar environment

Can a planet exist around a white dwarf? In theory, yes. Distant planets can survive the red giant phase. In case of our sun, Mars and planets beyond, will survive for sure. Only that their orbit will spin outwards, as Sol will lose 50% of its mass. The white dwarf will have far less light, so that the Earth (assuming it will survive and will be at the same orbit) will face freezing temperatures like at the orbit of Uranus. After being heated by the red giant phase, planets will most probably have no ice or volatiles (but they will probably refill their volatile stock from the planetary nebula: the discarded atmosphere of the former red giant consists of mainly hydrogen, some helium and a small amount of methane and ammonia).

In theory, there are two ways a planet can exist at a closer orbit to a white dwarf: First, because of perturbations from another planet, it can decrease its orbit. And second, it can be formed from debris left from the hosted star. We know from sure that planets or planetary dust clouds exist around white dwarfs (see here and here).

Habitable zones are described here. The author insists about the time needed for life to evolve on a hosted planet, because the star will get cooler in time. This is not important for a settler, because human life is far too short compared to stellar life.

The light generated by a white dwarf is similar to the equivalent classes of stars, except that it is far more faint. It consists of infrared, visible and ultraviolet light. Cold stars have more infrared and red, while hot ones generate more blue and ultraviolet. It is important for a planet to receive both red and blue light, in order to survive. So, the light properties will look similar to other visible stars. Major differences will be the lack of solar wind and the much lower energy output, because of the star's smaller size. The following scheme shows details about Habitable Zone. Planets in comfort zone need no greenhouse gasses, the other planets need.

The amount of infrared, red, blue and ultraviolet light is different for each type listed. To learn more about the relation between light spectra and plants, please go to related sections of main type stars.

There are some important things to note here. Tidal forces around a white dwarf are strong, just as expected to its mass. It doesn't matter that the star is so small, it still is massive. Tidal forces around Sirius B (since its mass is 50% of that of Sol) are 50% of the tidal forces in solar System. So, planets closer then 0.2 AU should be tidal locked. If not, they would experience huge volcanism. This means that majority of habitable planets should be tidal locked or have a 3:2 resonance like Mercury has. The environment will look similar to the planet described at M - type stars.

We have no idea how a planet around a white dwarf would look like. There could be 3 hypothetical planets:

Survivals are what is left from the previous solar system. Imagine the future of Solar System, with Sol as a white dwarf. Mars will be a dried piece of rock. Jovian moons would be that way too, the red giant sun would have evaporated all their water. From Saturn and beyond, water should still exist, but the methane layers of Triton and Pluto would have vanished.

Intruders would be planets that somehow entered from distance. When Sol will lose mass, some planets will interact. If at some point Jupiter and Saturn get too close, it could be possible to throw one of their moons away, maybe into an inner orbit or outside Solar System. Also, a new planet could come from the interstellar environment.

Phoenix planets would be created from the ash. This has happened with neutron stars, where planets formed from their debris, so why couldn't this process happen also for white dwarfs [1]? If so, these planets would contain nearly the same elements found in the core. Around a carbon white dwarf, there could be a phoenix planet made of carbon, with gigantic diamonds on its surface.

Giving the high amount of white dwarfs in the galaxy, there is a high chance that settlers will find them habitable and will try to terraform their planets sooner or later.

Classification of white dwarfs based on core structure

The following types exist only in theory and have not been discovered.

Hydrogen white dwarfs. Large Brown Dwarfs have enough mass to end-up as white dwarfs. After they have exhausted their deuterium, they slowly cool down, as residual heat prevents them from collapsing. When heat in the core decreases to a low enough value, it starts compressing further, releasing extra heat. The process continues until a white dwarf is formed. However, the time needed for this process to happen is long enough and this explains why no hydrogen white dwarf has been detected. Such white dwarfs should be easy to detect, given their low mass (below 0.07 Solar masses) and low luminosity.

Since hydrogen requires a low temperature to fuse into helium, the stability of hydrogen white dwarfs is questionable.

Helium white dwarfs. M - type stars are unable to fuse helium. So, when they have exhausted their hydrogen, they start compressing until they become white dwarfs. They are entirely made of helium and have a mass of 0.1 to 0.4 Solar masses. However, given the extremely long lifetimes of M - type stars, which exceed all models for the age of the known Universe, no helium white dwarf had time to form yet.

Carbon - oxygen white dwarfs are the most common and have a mass 0.5 to 1.03 Solar masses.

O - Ne - Na - Mg white dwarfs are corpses of stars with a mass around 8 to 11 solar masses. They have a mass have 1.03~1.3 and are composed of oxygen, neon, sodium and magnesium. They are most notable because of their high mass.