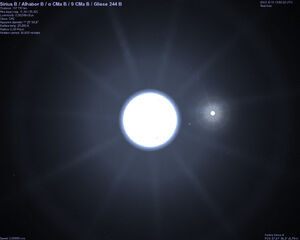 Sirius is a binary system and one of the closest star to the Solar System. Due to its proximity, it is the target of many research programs including hunts for planets and a good place for many sci-fi novels and movies.

Sirius is the brightest star visible from the Solar System. It is composed of two stars: a bright, main-sequence A - type star and a small white dwarf. There are a lot of speculations about possible planets in the system.

Sirius A is the main star of the system. It belongs to the A-Type Stars and its light is bluer then the Sun. Because of this, it emits highly doses of ultraviolet and X rays and less red and infrared. Its Stellar Wind is stronger then the Sun's, but not as strong as other A - type stars.

The mass of Sirius A is around 2 Solar masses, it is 25 times brighter then the Sun, its diameter is 1.7 times larger then the Sun.

Sirius B, often called The Pup, belongs to the White Dwarfs. With a mass slightly larger then the Sun and a diameter similar to Earth's, Sirius B is extremely compact. It is hotter then Sirius A and emits more UV radiation per amount of light. Sirius B emits far more X rays then Sirius A, probably sterilising any surrounding planet.

Both stars orbit each other each 50 years, on an elliptical orbit. The existence of a Habitable Zone is theorized to exist around both planets (at least in visual light and temperature). Due to their elliptical orbit, planets orbiting both stars must be far enough to resist long-time perturbations. Also, planets orbiting one star would experience significant tidal stress from the other one.

White dwarfs are corpses of dead stars. Sirius B is thought to be too large to be a carbon-oxygen white dwarf and instead is theorized to be an oxygen-neon-sodium-magnesium one. Given its mass, carbon could reach thermonuclear ignition point, could explode into a supernova (see White Dwarfs - Explosions for details). However, if Sirius B accretes more matter (which might happen when Sirius A turns into a red giant - see Red Giants for details), it can also explode, with its core collapsing into a neutron star (see Neutron Stars).

Sirius B is thought to be the corpse of a B5 star. B-Type Stars are far brighter then the Sun and short lived. It is also thought that at that time both stars were much closer and were orbiting on more circular trajectories. A B5 star emits 900 times more light then the Sun. An Earth-Like Planet would orbit both stars at a distance of 30 AU, which is comparable to Neptune. A Kuiper Belt similar to ours would be located at 1200 AU.

As it approached its red giant phase and it expelled its outer layers, Sirius B became much hotter and expanded its habitable zone probably to its former Kuiper Belt. Any planet orbiting close enough would have lost its atmosphere and water. As it lost most of its matter (from 7 or 8 Solar masses down to 1.1), Sirius B lost its gravitational grip on outer planets and on Sirius A. This sent whatever planets might have existed on outer and elliptical orbits. These planets were left basically only with the light received from Sirius A. Also, any planets that might have orbited Sirius A or directly Sirius B have experienced scorching temperatures, losing their water and volatiles (if they had any). Temperature must have been high enough to liquify the soils of those planets. There were not many stable orbits around both stars when Sirius B was a B - type star.

It is known that giant planets in orbit around red giants and red supergiants tend to increase their sizes, as they feed upon the solar wind. However, it is not clearly known what happens to them when these stars expel their outer envelopes. What is for sure, is that whatever planets orbited both stars were forced to move on further orbits. Also, whatever Kuiper Belt existed before, dramatically lost part of its volatiles (water and solidified gasses). The moons surrounding giant planets also lost significant amounts of their volatiles.

According to this evolutionary model, the chances of planets to exist around Sirius A are small, around Sirius B are non-existent and whatever planets exist further away must be dry, waterless worlds, experiencing very low temperatures.

However, as exploration often proved, our theories and ways of understanding are often wrong. There still is a chance that an Outer Planet might have migrated inwards due to a close encounter with another planet disturbed from its previous orbit. Also, planets orbiting white dwarfs have been detected and they could form from matter expelled from the star while becoming a white dwarf. Planets can replenish their volatiles through outgassing. So, chances for a planet that can be made habitable are not zero.

In the future, Sirius A will become a red giant, will also expel its outer layers and will end-up as a carbon white dwarf, with a mass of 0.5 Solar masses. As this will happen, a few additional factors will dramatically change the Sirius system. Sirius B will gain mass by accreting matter from Sirius A, will reach its mass limit and will collapse into a neutron star, also producing a mild supernova. Neutron Stars have very dim light, but huge emissions of gamma rays, sterilizing any planet in their vicinities. The system, in the future, will consist of a white dwarf and a neutron star, planets orbiting on far and elliptical orbits and will not be suitable at all for terraforming.

There have been a lot of suggestions that Sirius might have a planet. Substellar companions have been suggested. However, Brown Dwarfs, if they exist, would be easy to directly imagine. The biggest claim up to date is of a giant planet orbiting Sirius A roughly every 5 years on an elliptical orbit.

Unlike other dimmer stars, like Barnard's Star, which can be imaged with Hubble or James Webb telescopes, Sirius cannot be imagined for long, because it is too bright and could destroy the optics. So, we cannot directly look for a planet and we cannot detect gravitational perturbations (wobbles) with the precision required to pinpoint small planetary bodies.

The distance between both stars vary, as their orbits are elliptical. Safe orbits around Sirius A go as far as 7 AU and around Sirius B as far as 2.5 AU. Safe orbits exist further away, at over 60 AU from both stars. So, both stars have safe orbits within their habitable zones. Sirius A is 25 times brighter then the Sun. An Earth-Like Planet would be at 5 AU. Sirius B has a luminosity of only 5% of what the Sun provides. Its habitable zone is much closer, at 0.2 AU. Both stars have orbits for an Inner Planet, while Sirius B has plenty of orbits for an Outer Planet.

Sirius A. There are plenty of stable orbits for inner planets around Sirius A. If these planets survived the red giant phase of Sirius B, they would be dry and hot world, most probably lacking an atmosphere. They would have strong magnetic fields, as the system is young and they would experience significant tidal friction from Sirius B. These planets could be rich in metals, as most of their volatiles have evaporated. However, we must not exclude the possibility of a planet that have migrated inwards into an orbit around Sirius A from outside, ending-up right in the habitable zone.

Sirius B. Although most theoretical models dismiss the possibility of a planet orbiting a white dwarf close to it, there are cases of planets discovered orbiting so. If a planet orbits Sirius B, it must be close to the star to receive enough heat to have liquid water. A planet orbiting further away (for example at 1 AU) would receive most of its light and heat from Sirius A. Such a planet could still be terraformed by adding greenhouse gasses. It would experience strange seasons, lasting decades, as Sirius B orbits every 50 years on an elliptical orbit. The planet would experience a few years of scourging hot summer followed by decades of cold, freezing winter. Greenhouse gasses will hold the summer heat for long, but not until next summer. There will be enough light for plants to grow during the year. See Elliptical Orbit for details.

Orbiting both stars. There are stable orbits around both stars beyond 60 AU. However, plant life needs both red and blue light. In the Solar System, plants can survive as far as the orbit of Neptune (see Plants on New Worlds for more details). Sirius produces more blue light and less red light compared to the Sun. Because Sirius is far brighter then the Sun, temperatures similar to the orbit of Neptune can be found at 150 AU. However, at that distance, there is not enough red light for photosynthesis. Red light reaches the limit that plants can tolerate at around 100 AU. So, there are stable orbits for a terraformable outer planet around both stars. If that planet has an elliptical orbit, it will need permanent adjustment of its envelope of Greenhouse Gases. Also, if its orbit passes beyond 100 AU, it will require an Artificial Sun or another source of red light to support life during those periods of time.

Far Orbiting Planets. Theoretical models suggest that whatever planets orbited Sirius system before Sirius B ended as a white dwarf, must have been pushed on outer and elliptical orbits or might have escaped the system, ending-up as Rogue Planets. If they still orbit the system, they might experience temperatures below -230 C and also have only limited amounts of ice and frozen gasses available. These planets might host the only sources of ice and other volatiles needed to terraform any planets located within the habitable zone or the extended habitable zone (terraformable with the help of greenhouse gasses). Transporting volatiles from far away (for example from 400 AU) would be a challenging task, as for a significant part of the journey Sirius A would transform shipments into artificial comets.

The biggest advantage of Sirius is that, being a bright star, it offers large habitable zones that can host many potential orbits for planets.

Some writers from ancient Greece considered Sirius to be red in colour. While some have suggested that Sirius B might have recently become a white dwarf and it still had a gaseous envelope surrounding it, others argued that Sirius might have passed beyond a space nebula. No planetary nebula (that would confirm that Sirius B have just become a white dwarf) and no interstellar nebula (that could explain a change in colour) have been detected. So, the change of colour is completely unknown, if it did happen.