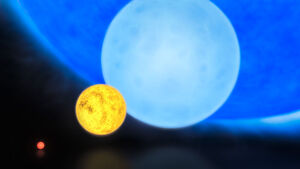 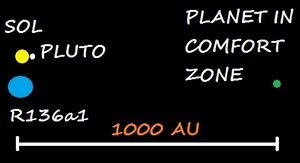 For a classification of stars see The H-R Diagram. Further discussion about habitability and math is available at *Main Sequence O Type Stars - Habitable Simulation. See Main Sequence Stars too.

O-type stars are the hottest of all. They have strong solar winds and deadly radiations and may possess only a theoretical habitable zone.

Even if they have the strongest luminosity, these stars are extremely rare. The brightest star of them all, R136a1, is a million times as bright as our sun, Sol. Their lifetime is extremely short, after this they will explode as supernovas and will become black holes. Also known as Wolf-Rayet stars, their solar wind is so powerful that they lose matter a billion times faster than Sol, through solar wind. Blowing away all their energy fast, these stars will last not much above 0.5 million years.

Light composition is different from what a habitable star has. The largest part of their radiation is in far ultraviolet and also in x-ray. Deadly, this radiation will kill any existing organism. Visible light is mostly emitted in blue and is less then 10%.

Many scientists argue that O-class stars live too short (0.1 to ten million years) to form planets. Their powerful solar wind can blow away a planetary disk. However, if a planet is captured and misfortunately gets into orbit around such a star or gets formed somehow, it will experience many problems.

The habitable zone is difficult to determine. The comfort zone (visual) around R136a1 should be around 1000 AU! since the star emits mainly far-UV light, visual light should be at an intensity of only 10% of what we see on Earth. Solar wind are 1000 times stronger then what Sol creates at the orbit of Earth. What a strong internal dynamo is needed to generate a magnetic field to divert the solar wind? A very fast spinning planet with a huge moon, with so strong tidal forces that will have massive volcanism like Io, probably will make it, but for sure that is not something habitable. At such a distance, the planet will rotate very slow around its host star, in thousands of years. Climate changes would be similar to planets around B - type stars.

One major problem is that the star is constantly losing mass. As this is happening, gravity is decreasing and planets are moving outwards, until they are free-floating through the galaxy.

Let's suppose that genetically modified plants can survive this extreme radiation. By adding greenhouse gasses, more distant, cooler planets can be terraformed. The outer limits of habitable zone can be calculated as shown below:

What we see from here is that the outer limits for a terraformed planet (with modified plants using ultraviolet light) is stretching 0.5 light years away. And also, if we replace Sol with R136a1, all planets would simply vaporize because of the extreme heat. Even Kuiper Belt objects (if they were made of rock) would melt and evaporate.

Only a highly advanced technology can be able to manage the environment around such a powerful star.