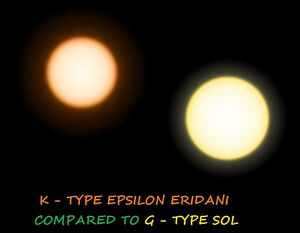 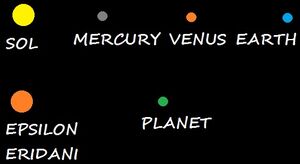 K - type stars are the second most common main sequence stars after M - type stars. Two well known examples are Epsilon Eridani and Alpha Centauri B. They have a mass of 0.6 to 0.8 of that of our sun, Sol. They have a smaller Habitable Zone. Their stellar lifetime is more than twice that of our sun's. Examples include the second star of Alpha Centauri system and Epsilon Eridani.

Also known as orange dwarfs, these stars appear orange in color, but, like most stars, are white. They are similar to Sol in many respects: similar radiation output and similar behavior. Luminosity of such stars is roughly between 10% and 50% of that generated by our sun, their light output spectrum is ample across the visible spectra, but the blue component is weaker than that of Sol. Unlike M - type stars, they tend not to give off such powerful flares and are expected to have sunspots similar in size to those of our sun.

Solar wind is present, but it's not so powerful; ultraviolet output is lower than that of Sol, which means these stellar objects have exponentially longer lives than hotter, more brilliant stars. Over the course of billions of years they change very little in brightness, providing potentially more enduring stable habitable zones. As a result, one might consider these stars better candidates for colonization than G - type stars like our sun, Sol.

The star has an estimated Habitable Zone comparable to an orbital placed at a distance approximately equal to an area between Mercury's and Venus's orbits around Sol.

A planet orbiting an orange dwarf, at the center of its Habitable Zone, would be located around 0.5 AU, similar but slightly further out than the orbit of Mercury in Solar System [1]. Since its stellar mass is close to Solar mass, slightly less, tidal forces would be quite similar for planets in general, but slightly stronger. If, the planet is orbiting at the distance of Earth, 1 AU, then the planet's tidal hold on a satellite the size of our moon will be slightly stronger than the hold Earth has on our Moon, because the planet will face slightly less competition from its slightly smaller star's slightly smaller tidal pull. However, there would still be a much stronger tidal pull from the slightly smaller star if the planet is as close in as the habitable zone, at 0.5 AU, 5 times stronger, and that would mean a smaller gravitational sphere around that planet. So, there would be a smaller chance that the planet will hold onto a moon that could keep its internal dynamo active. Without a magnetic field to protect the planet's atmosphere it will be exposed to erosion from the solar wind.

As shown from Internet Stellar Database, a planet orbiting Epsilon Eridani in the comfortable zone, for visual light, will be at a distance of 0.54 AU, orbiting the star in 157 days. (If, infrared light heating is taken into account, the habitable zone is further out, between 0.58 and 1.04 AU, and at 0.606 AU for the most Earth similar heat conditions. At these further out distances considerably longer tidal locking times would be expected particularly in the outer part of the habitable zone; for an Earth-sized planet, without a moon and with a perfectly circular orbit, the tidal locking on the inner edge of the habitable zone is around 25 billion years and that goes up to 900 billion year towards the outer edge of the habitable zone with 35 billion years at 0.606 AU, compared to 475 billion years for our Earth.) The year will be half the length of an Earth year, enough still for seasons to occur. At a similar axial tilt to Earth, seasons, where they occur, will be shorter. This might prove hard for some Earth-type plants to adapt to.

Habitable zone can be extended with the help of technology. An inner planet could be cooled down in the same way that has been proposed for Mercury or Venus, by reflecting light away somehow, perhaps with the use of space mirrors.

In the Solar System, at closer distances than Earth, planets tend to spin very slowly, but are not tidally locked. If that is the case for a planet in the habitable zone around an orange dwarf, we might expect it to have some strange seasons, like for Venus or Mercury. With a day of 50 to 200 Earth days, there could be extremely cold nights and burning hot days.

The outer limit of habitable zone can be extended with the help of greenhouse gases. Orange dwarfs have similar light to that of Sol, only with less blue light. In Solar System, the outermost distance where Earth-like plants can survive, is close to the orbit of Neptune, where light is only 0.1% of that received by Earth. So, we would expect a terraformed planet to exist as far as 15 AU. However, plants need both red and blue light to survive. So, the habitable zone for plants is the distance where both red and blue light is found more than 0.1% of the amounts found on Earth. Since an orange dwarf produces 20 to 50 parts of blue light per 100 parts of red light, the distance is reduced to 9 AU. Genetically modified plants might be able to survive as far as 15 AU.

If an orange dwarf replaced our Sun, the planet Mercury would most probably be quite near the inner edge of the habitable zone, while the outer limit for an Earth-like planet would be around the orbit of Earth, out to Saturn or even Uranus with the extensive use of terraforming technology. Typically an orange dwarf star system's habitable zone is like a squeezed in version of our Solar System's, compressed slightly and shifted inwards a planet or two.

Through calculation, it can be seen that around 0.8 AU a planet would take about 365 Earth days to orbit around the star. For that reason alone, and with a little more greenhouse gas added, a planet in that orbit could be heated up and turned into a "Second-Earth-Opportunity" for all those hardworking and industrious standardized calendar vendors, who want to go out there and reach for the stars!