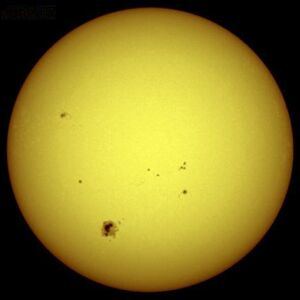 For a classification of stars see The H-R Diagram.

Yellow stars generate the same kind of radiations our sun does. They have infrared, visible and ultraviolet light in almost the same percents. Among yellow stars, some are brighter and some are fainter then Sol (majority are fainter), but variations are not so big. An example of brighter star is Alpha Centauri A, while an example of fainter star is Tau Ceti.

The sun is considered a yellow star, but its light is in fact perfectly white. If you want to define the term 'white' you must note 'light with solar spectra'. However, because of the contrast made by the blue sky, Sol is considered to be yellow.

Hosted planets will face similar challenges with planets in Solar System. A planet in the Habitable Zone will be orbiting the star somewhere between 0.7 and 1.2 AU. One model for the faint Tau Ceti can be found here, while a model for Alpha Centauri A is found here. Overall, the perfect habitable orbit will be placed between the orbits of Venus and Mars.

Habitable zone can be extended, like for the Solar System, to warmer or colder planets. Just as proposed for Mercury, similar technologies can be used for similar planets. Colder planets can benefit from greenhouse gases. The outer limit for terrestrial plants is the orbit of Neptune, where light intensity is only 0.1% from what we see on Earth. Because some stars are brighter and some are fainter, we can put the outer limit at a lower or higher distance (from beyond the orbit of Uranus to the orbit of Pluto). Planets need both red and blue light, but these stars generate both spectra at the same amount Sol does.

Settlers on a planet around a G - type star will find themselves close to the most familiar type of sun. They will need only limited time to adapt.