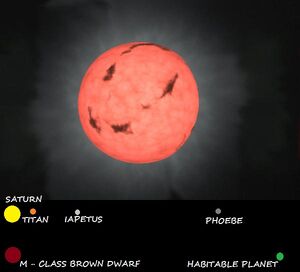 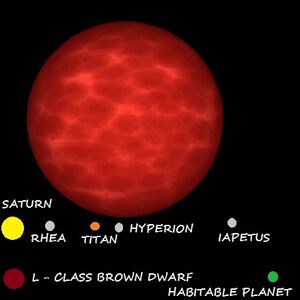 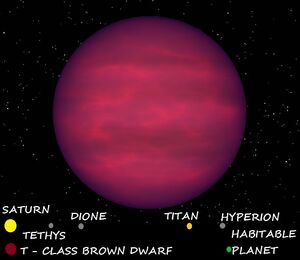 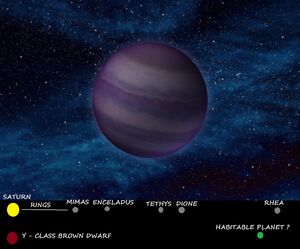 A brown dwarf is a failed star. It is a celestial body too small to fuse hydrogen, but still able to produce some energy by fusing deuterium into helium. Even if their light is too dim for plants, still they generate enough heat to warm a planet in a close orbit.

An object smaller then a brown dwarf, unable to fuse deuterium, is called a Sub - Brown Dwarf.

Luhman 16 is a system composed of two brown dwarfs.

Characteristics of a Brown Dwarf

The life of a brown dwarf can be separated into four different stages:

1 - Formation (M-class). Brown dwarfs might form in a similar way to stars: from a cloud of gas and dust. But in the case of brown dwarfs, the cloud is too small to make a full star. Some of them orbit around a host star, so they were created like planets. In either case, the collision of matter collided should have generated enough heat to start a nuclear reaction. If the initial temperature was high enough, it could be sufficient to start fusing hydrogen into helium. If that is the case, the brown dwarf will increase in size, so that pressure and temperature will decrease below the level needed for hydrogen fusion, then it will slowly contract. In this phase, the dwarf might look and behave like very dim M-type stars, and they might even have flares.

2 - Deuterium fusion (L-class). In this phase, a brown dwarf creates a limited amounts

of heat by fusing deuterium. The process does not generate too much energy. Deuterium is an isotope of hydrogen, with one proton and one neutron. Since deuterium is rarer than normal hydrogen, it will be exhausted quickly. Depending on their mass, some brown dwarfs might not be able to fuse all their deuterium. If they are too small, internal pressures will drop fast enough that up to 70% of deuterium will remain unused. Larger brown dwarfs will use all (or almost all) of their deuterium fuel.

3 - Methane (T-class). When nuclear reactions are no longer taking place, the brown dwarf will gradually cooling. As the internal heat decreases, surface temperature also decreases. At some point, the temperature drops below 1000 K and methane starts to be formed in the upper atmosphere. The brown dwarf still emits a dim red light, but its spectra contains some blue due to the heated methane.

4 - Black object (Y-class). At some point, a brown dwarf is so cold that it no longer emits visible light. It becomes similar to a giant Jupiter, with a similar (or even lower) diameter but much higher mass.

A brown dwarf can be directly created into M-class. However, if the accretion process is slow enough and matter has time to cool, it might simply result a lower-class dwarf.

A Sub - Brown Dwarf is an object that does not have enough mass to fuse deuterium, but looks similar to a brown dwarf. In theory, internal temperature at time of formation could have been enough to sustain deuterium fusion, but the pressure was not enough to maintain the process.

To get an overall look at brown dwarfs, please go here.

A brown dwarf has a diameter similar to Jupiter (slightly larger in its upper stages). Its mass is between 15 and 65 times the mass of Jupiter. Temperature varies, as shown below:

M-class dwarfs have a larger diameter (probably 1.5 times the diameter of Jupiter). L-class are named after the element lithium, because lithium decays easily in the conditions found in their cores. Spectral analysis has found metals in their absorption lines, this is because at their temperatures many metals evaporate and can be found as volatiles in the upper atmosphere. On the other hand, T-class dwarfs are cold enough to allow creation of methane, found in high amounts in their upper atmosphere. The Y-class is different. When they are cold enough, water clouds can be formed.

M-class brown dwarfs are flare stars, eruptive, with strong and dangerous flares, like the dim M - type stars. For example, DEN 1048-3956 was detected because of a massive flare it produced. When flares occur, light output might increase by 100 times in less then a minute. A flare also comes with a massive solar wind that will destroy existing ecosystems. Based on their average energy output, a habitable zone should be at maximum 5 million km away from such brown dwarfs. At that distance, the effect of a flare would be catastrophic.

L and T-class brown dwarfs have a dim, red light. To have a better idea how their light looks like, their light output is similar to a burning cigarette. An L-class one will look like a cigarette when someone is inhaling, while a T-class dwarf is like a cigarette resting on an ashtray. Their light is so dim that it it would be hard to find your way around on a nearby planet. Through a telescope, the Epsilon Indi brown dwarfs (T-class) are hardly visible in red, clearly visible in infrared and almost invisible in blue.

Please see this material for a map of habitable zones.

A Habitable Zone exists around the majority of brown dwarfs. It is not a conventional zone. Light is too dim for plants. In order to survive, a plant needs a light at the intensity of minimum 0.1% of what is on Earth, both red and blue. We are talking here mainly about a zone where infrared light generates enough heat for a planet to have liquid water. Greenhouse gasses are unlikely to be suitable for terraforming planets further away, because they will obstruct the infrared light coming from the brown dwarf, in the same way that they trap infrared emissions coming from the planet. However, if we took a brown dwarf into Solar System and placed it between Uranus and Neptune, and the planet was warm enough and had liquid water, solar light should be enough for plants to survive on it.

Since M-class brown dwarfs create powerful flares, increasing their light output 100 times (and blasting huge solar winds), their planets are unlikely to be chosen for terraforming. Only a very expensive shield could protect such a planet.

Around L-class dwarfs, there might be enough red light, but blue light would be almost non-existent. Still, some genetically-modified plants might be able to use only red light to photosynthesise.

For a T-class dwarf, a habitable zone still exists, a place where heat is enough to keep water liquid on a nearby planet. The light would be similar to what you see at 2 cm from a burning cigarette. Settlers would find hard to walk without a lantern. Could any plants survive there? Only some genetically-modified plants might be able to use near-infrared light. The longer the wavelength, the lower the energy.

As for Y-class brown dwarfs, their energy output is so low that nearby planets would not be warmed enough. A heated planet would need to be below the Roche limit, the distance where the dwarf's powerful gravity would cause the planet to disintegrate. Still, some heat is received by the planet, not enough to keep water liquid, but it could allow for other liquids such as methane. Also, an orbital station could be placed close enough to an Y-class dwarf to provide the needed heat. Note that brown dwarfs may produce strong tidal heating, so even without radiant heat their planets may warm themselves enough for liquid water to exist.

A planet orbiting a brown dwarf should be very close, as shown below:

At such close orbits, planets would be tidal locked, showing the same face to the brown dwarf at all times. On one side temperatures would be high, but on the other side, there could be an eternal winter. Orbits will tend to be almost perfectly circular. Tidal forces would be much stronger then for planets around M-class stars. These planets could be more violent then Io, but this is not a rule. If the planet has a circular orbit and there is no nearby object to create perturbations, tidal effect should not be so violent.

Planets around brown dwarfs would not have their own satellites, due to huge gravitational influences from the brown dwarf.

A brown dwarf would appear extremely large, comparable to (or even bigger than) Jupiter seen from Io. Because of the dim light, stars would also be visible. Everything, clouds and objects alike, would appear to be dark-red.