Bioforming is an opposite conception to terraforming, bioforming aims to transform earth life to improve its capability to survive on another celestial body (planet or moon). Life has evolved to be very well adapted to Earth and there are limitations to how much terraforming can make a planet similar to our own (e.g. rock type and gravity levels can never be changed). With genetic engineering and synthetic biology technologies continuing to push the boundaries of what is possible, bioforming stems from the idea that it is likely to be easier to change life for a planet, than to change a planet for life. The intermediary concept between terraforming and bioforming is terrabioforming. 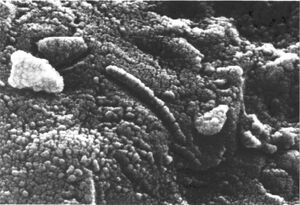 Other planets and moons in our solar system are very different to Earth. Animals and plants, including humans, could never naturally adapt to occupy these environments as they would not be able to survive there in the first place. Microbial life, which is already surviving in extreme conditions all over the World will be much more capable of surviving on other planets and is much easier to genetically engineer.

Microbial life can survive in many extreme environments, such as extremes of temperature, pressure, pH, and water availability. The field of astrobiology aims to define the limits of life in different environments in order to aid the search for life elsewhere in the universe.[1] So we have a good understanding of some of the capabilities of extremophilic microbes:

Although microbes have not reached other planets yet (or at least not been studied on other planets) due to comprehensive decontamination procedures, they have been used in many experiments at the international space station (ISS). For example, microbes have even been used to extract rare earth elements by biomining of asteroid material, showing that they are able to perform useful functions in the microgravity of space [5]. They have even shown an ability to adapt to the space environment by mutating rapidly [6], shining hope on life's potential to spread throughout the cosmos. Microbes can already survive in the void of space, albeit without reproducing, and extremophiles can probably already survive in certain habitats in the subsurface of Mars or in the oceans of Enceladus and Europa. But for microbes to survive on the surface of other planets, then modifications are probably required.

Synthetic biology has already been successful in improving the capabilities of microbial life in manufacturing, pharmaceuticals, and farming. For example, using metabolic engineering, microbes can produce biofuels or remove harmful mine wastes. By inserting the DNA of one extremophile into another, genetic engineering can combine the capabilities of different extremophiles so that multiple adaptations can be present in one organism. Then this organism can be optimised for survival in a certain environment by overexpressing the genes that code for proteins that are useful for the organism's survival.

As a case study, what capabilities could we give a microbe that would allow it to survive on Mars? (this is absurdly simplified (obviously))

This sounds like a good start, microbes adapted to many different planets and moons can be imagined and bioforming microbes to survive on other celestial bodies is a crucial first step for bioforming any other species.

Humans are usually the first species that are thought of in the context of bioforming. Many science fiction novels have been written that describe the improved capabilities of a space-faring human race. For example, Olaf Stapledon's Last and First Men describes a range of different species of 'men' with different adaptations like antennae, wings, 6 fingers, and larger brains. The rate of development in the field of genetic engineering threatens a glimpse into this reality in the coming decades. But first, how have humans already adapted to environments on Earth?

Humans have adapted to the various different conditions found on the Earth:

With current technology, it may be possible to adapt humans to live in some extreme conditions:

Compared to other animals, humans evolve slowly. There are 3 important things that define how fast will a species adapt: the number of descendants per generation, the time between generations and the genetic pool. In case of humans, there are a small number of descendants per generation (even a few hundreds years ago, a family had an average of 6 children). Talking about the amount of time between generations, in case of humans, it usually is about 25 years. The genetic pool refers to how diverse is the DNA among the species. In case of humans, differences are not big, compared to animals. For example, humans have only 4 blood groups (and a few very rare ones), while animals have far more [14]. So, humans have a far smaller chance to naturally adapt to extreme environments and gain these new capabilities. Genetic manipulation is, therefore, required to circumvent this problem.

Survival is not the only requirement for humans as we have very complex emotional needs. To put it bluntly, there is no point in giving a human the capacity to survive on another planet if they have no will to live. So it is crucial that the environment around humans is managed to ensure that our complex needs are met. This may be in the form of the creation of a natural ecosystem prior to human colonisation.

Some environments like the heat of Venus or the lack of ground on Saturn might just be too extreme for bioforming alone to provide humans with the capabilities to survive.

The highly adapted races might not look like humans and will be too different from us to adapt back to Earth-like environment. So with a bioforming strategy, humans might always be stuck on the planet that they are born on, casting doubt on a Star Wars universe where people can travel to distant planets and moons.

Before humans step foot outside of an enclosed habitat into a planet without a space suit, plants should already exist as they are essential for our survival. They provide us with oxygen, food, medicines and they look after our mental wellbeing. Plants should be easier to transform than humans because they are simpler and don't have as many complex requirements.

Plants have a suite of complex adaptations that allow them to survive on almost every environment on Earth:

There is a long history of genetically engineering plants to increase farming yields, food taste, and reduce farming costs. Applying some of this knowledge to space can go a long way:

Many planets are tidally locked, which means that one side of the planet is always facing the star whilst the other side is always in darkness. Needless to say, this presents a problem for plant life that aims to survive on the dark side of a planet. Luckily, Mercury is the only planet in our solar system that is tidally locked. Tidal locking most often occurs with moons, but tidal locking doesn't prevent light reaching both sides of moons.

Plants require symbiotic relationships with many other species of insects (for seed dispersal) and fungi (for nutrient acquisition) to survive. So engineering plant life to survive on other planets will require engineering of other life forms such as fungi, bacteria and maybe even insects. But realistically, seed dispersal drones are more likely to be prevalent on other planets than bugs.

Bioforming is possible with microbial life, and soon it might be possible to do the same with plant life. This presents a faster method to colonise other planets with life, and provide the foundations for an ecosystem that humans could colonise. Human bioforming is still very much a dream of science fiction, but in the future bioforming might be a much faster, and less costly method to colonise new planets. There are, however, many limitations to bioforming, which terraforming can help to ameloriate, thus terrabioforming is likely to be the best course of action.