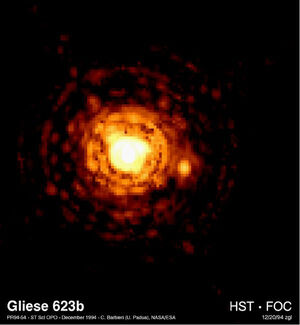 Barnard's Star is one of the nearest stars to the Solar System. It is very old, it was here before our galaxy formed and it has long been searched for extrasolar planets. Barnard's star is a red dwarf (a common name for M-Type Stars) and it belongs to the mild-activity group of Flare Stars.

M-Type Stars, like Barnard's Star, are dim celestial objects that, despite being close to us, are invisible to the naked eye. They emit most of their light in infrared and most of visible light in red spectra. Their mass is less then 40% the mass of our sun, Sol, while their diameter is even smaller. Because of the small mass, these stars fuse hydrogen into helium much slower then the Sun does. Less heat generated in the core means less expanding force and less radiating heat. On the other hand, as M - type stars fuse their hydrogen much slower, their lifetime is far longer then other stars. By the time there will hardly be any interstellar matter left in the galaxy to form new stars, Barnard's Star will still be around.

M - type stars are also known as flare stars. Unlike the Sun and other larger stars, which don't mix matter between their cores and outer layers, M - type stars have large convective currents, which allow a continuous exchange of matter. This phenomena has two important results. Firstly, virtually all hydrogen is pumped towards the core to be fused into helium, increasing the life span of the star. Secondly, convective currents disrupt magnetic fields, allowing for solar flares to occur. Young and small M - type stars are known to have extremely powerful flares. Barnard's Star is much calmer but still has occasional eruptions.

Metalicity (amount of elements heavier then helium in the composition of a star) is between 10 and 30% of the Sun. Because Barnard's Star is far older, its solar system was fed from a cloud less abundant in heavier elements then the Solar System. In such conditions, the chances of rocky planets to form is smaller (probably around 20% compared with other systems). Still, gas giants could form from and they would be mostly made of hydrogen and helium.

Giving Barnard's Star age, it is presumed that most radioactive elements (like uranium or thorium) have decayed by now. The cloud that collapsed to form the star and its planetary system contained a different amount of chemical elements. It was fed with heavy metals from the Primordial Stars. We've never seen those stars through a telescope yet, although we know they were much larger then today stars and ended their lives fast, in extremely violent explosions. Some scientists suggest that these stars seeded the Universe with a completely different proportion of chemical elements then what we see today coming from supernovas. Perhaps the planets orbiting Barnard's Star are richer in heavier elements (like lanthanides, precious metals and lead - which is the decay product of heavier elements). We simply don't know.

Planets around Barnard's Star have been exposed to the elements for much longer then planets around other stars. They have witnessed nearby supernova explosions, flares from the star itself and many gravitational interferences. Because of this, their original atmospheres might have been depleted. However, new volatiles might have been brought via meteoric impacts and outgassing.

A big question about old stars is if their original planets can maintain their orbits. On a long timescale, planets change their orbits thanks to orbital resonances, perturbations from passing stars and many other factors. As Barnard's Star is old, it rotates very slowly (once every 140 days). Any planet closer then the synchronous orbit will slowly be pulled towards the star, while any planet orbiting beyond will be pulled further away. The effect is extremely small for further planets (which on the other hand can be more exposed to external gravity interferences), but significant over long timescales for an Inner Planet in the habitable zone.

While there is a significant chance that an original planet located in the habitable zone might not survive for 10 billion years, there is also a chance that an Outer Planet might have migrated inwards. Also, Rogue Planets could have been captured into orbit around the star. Anyway, a captured planet, formed much later then the star, must have a completely different chemical composition.

Barnard's Star has many more tens of billions of years to live. At the end of their lives, M - type stars turn into Blue Dwarfs for a few billions of years, then contract into White Dwarfs. This process comes with only little mass loss from the star.

There have been repeated claims of possible planets in orbit around Barnard's Star. Peter van de Kamp claimed to find evidence for two gas giants. It took decades to prove that his planets don't actually exist. After many years of observations, one planet, Barnard b, was proposed, but not confirmed.

A habitable planet around Barnard's Star has been the topic of many science-fiction books and movies.

The Habitable Zone around a red dwarf is different then the habitable zone around the Sun. Because these stars are so dim, the habitable zone is far closer to the star, at 0.046 AU (7 million km). At that distance, a planet would orbit the star in 7 days and will be tidal locked. The planet's Hill sphere will be small and there will be no room for moons. Even artificial satellites will not stay in orbit for long.

Human life strictly depends on plant life. In order to survive, plants need both red and blue light. The lowest luminosity that can allow plants to survive is about 1/1000 of what we have on Earth (similar to light conditions at the orbit of Neptune). Barnard's Star emits most of its light in infrared, while among visible light, most of it is in red. Blue radiation is weak. Basically, the star produces 10 times less red and 100 times less blue then infrared. With such a low amount of blue light, Earth-like plants will not be able to produce high amounts of food and oxygen. Genetically-modified plants, able to use more red and infrared light, will still not be able to work as well as plants on Earth. See Plants on New Worlds for details.

A further, outer planet, can still be terraformed with the use of Greenhouse Gases. However, as we move away from the planet, the amount of visible light decreases dramatically. Because of this, the extended habitable zone (which includes planets that can be terraformed with greenhouse gasses) is much narrowed outwards. In the Solar System, terraforming is possible out to the orbit of Neptune (30 AU). Around Barnard's Star, greenhouse gasses can increase the temperature of a planet to liquid water as far as 210 million km (1.4 AU). However, blue light drops below what Earth-like plants need at only 0.1 AU and red light at 0.45 AU.

An Inner Planet, if it exists, is very close to Roche limit (where Barnard Star's gravity will break it apart into a ring). Such a planet might not survive for long.

A big challenge to planets orbiting close to red dwarfs is the damage caused by flares. It is known that Barnard's Star has flares, but they are far weaker then what we see around other similar stars. The flares that exist around the star are enough to erode the atmosphere of an Earth-like planet over millions of years. However, this phenomena would go unnoticeable during a few millennia, the time needed for a human civilization. The effect of a flare would be devastating, but not deadly. It can cause massive ionization effects, kill plants and animals directly exposed to its light and destroy electrical equipment.

Repeated flares can cause periods of draughts or hurricanes, while absence of flares on the other hand can cause mini ice ages. People will see massive auroras during flames.

A habitable planet will certainly be tidal locked. On the side facing the star, temperatures will be very high, while on the opposite side it will be very cold. See Tidal Locked Planet for details.

Given the age of Barnard's Star, the chances of a Kuiper Belt is small. Outer bodies, like the ones that form Kuiper Belt and Oort Cloud, are at far higher risk of being ejected by close stellar encounters.