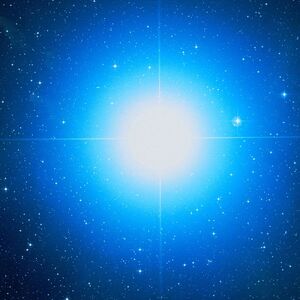 B - type stars (blue-white) are very rare, but because of their extreme luminosity, they form the majority of stars visible on the sky. Because they are located at high distance, their systems cannot be colonized until interstellar transport will pass the speed of light. Such a star might host a gigantic Habitable Zone.

Almost all important stars are in fact B - class stars. Some of the most known are the 7 Pleiades, Rigel and Deneb.

Luminosity of such a star is very powerful. For two stars, Rigel and Deneb, luminosity is shown below:

It is easy to see from this scheme that these stars emit less light in visible spectra. So where is the extra light? According to blackbody radiation theory, for such a hot body (over 20 000 K), the majority of radiation will be generated in ultraviolet. More even, the star will generate less red light and a lot more blue light.

The environment surrounding Rigel or Deneb is full of magnetic fields and solar winds. This is because such stars spin very fast. Pleione, one of the Pleiades, is spinning so fast, that it has a visible ellipsoidal shape. Even more, it is losing matter from its equator, creating a glowing disk around. Such fast rotating stars create huge magnetic fields around. On the other hand, these stars end their hydrogen very fast. Deneb stopped fusing hydrogen and is in a small break, waiting to start using helium. When this happens, massive convection currents mix all matter inside the star, pushing any available hydrogen into the nucleus. When these currents appear, magnetic fields also suffer.

Fast spinning stars lose matter from their equator, to be blown away by radiation pressure, feeding the solar wind. These stars have more diffuse atmospheres, so that under their huge radiation pressures matter is more easily thrown into solar wind. Because of this, some astronomers assume that B - class planets cannot have planets, until some were discovered. Planets could have formed from a planetary disk or they can be captured.

When a B-type main sequence star uses up all of its hydrogen fuel, it will swell into a red supergiant. Its core will become hot enough to fuse heavier elements until its core becomes iron. When this happens, it will explode as a supernova, leaving behind a neutron star.

Since B - type stars have so short lifetime, many people suppose life cannot form on their planet. Also, some scientists assumed these stars have a too strong solar wind and will blow their planetary disk away. All this lasted until a they found some planets

Distance to the inner of habitable zone is huge. The Internet Stellar Database (ISDB) shows possible orbits for a habitable planet inside the visual comfort zone (the distance where visual luminosity from the star will equal the luminosity of Sol on Earth). The distance is 197 AU for Rigel (with an orbital period or 669 years) and 258 AU for Deneb (with an orbital period of 829 years). But because these stars also emit a lot of ultraviolet light, the center of the Habitable Zone should be placed further away, at 348 AU for Rigel and 456 AU for Deneb. Rotation period will be even longer, over 1000 years. At that distance, the star will only be visible as a star and not as a disk (like Sol), but its light will be strong enough.

Tidal force of the star is very small at such a distance. ISDB shows it to be only 0.0001% of Sol's influence to Earth. This means that the planet's spin will not be affected. Each planet will have a large gravitational sphere surrounding it, so it will be a high chance to find moons. a moon, combined with high rotation speed, will keep planetary dynamo working, creating a powerful magnetic field. Also, since planets are expected to be very young, their spin rate should be very fast. Is this enough to deflect a massive solar wind? Even if it isn't, B - class stars have a short lifetime, so they might not had enough time to blast all the atmosphere away.

Some planets might be too young to cool down and have suitable rocky surfaces. They might be covered with small plaque tectonics, surrounded by an ocean of lava. However, a colder planet might be captured from interstellar environment.

Climate of such a planet will be interesting. Assuming the planet has a tilted axis, seasons would exist, but they would last for hundreds of years. A planet with similar tilt like the earth, would experience summers and winters lasting for 250 years! In such conditions, snow will gradually accumulate in winter and create giant glaciers, while the ocean will dramatically drop. In 500 years, when season will change, all glaciers will gradually melt, water will return to the ocean for a while, then it will start to accumulate on the opposite hemisphere. When there will be winter on one hemisphere, the other will be in summer. since oceans will decrease in size, the summer season will transform large areas of land into deserts. So, the planet will experience four long seasons:

Each season will last for 250 years, enough for many generations. If you were born in winter, you would see only snow for all your life. If you were born in autumn, it will be the best. For humans, things will be like this: Entire cities will develop and grow when conditions allow this. Then, they might become flooded or buried under ice. some people would remain there, but the majority of population will migrate. We are talking about a slow migration, about children moving to a new place and abandoning the place where their grandparents have settled.

Facing the problems will be a huge challenge. Even with a dense ozone layer, there will be not enough protection for a star that blows most of its light in ultraviolet. Earth-like plants will have no chance to survive. Life might exist only in oceans. Genetic-modified plants and animals can survive this. Humans would go out only in night time and cover all their skin and eyes during daytime. The powerful solar wind will create endless aurora over entire planet, visible even in daytime and as far as the equator. It will be a strange place, where people sleep during day and work only in nighttime. The strong solar wind can be used by solar sails, but huge distance between planets will be a problem (see below).

Inner, warmer planets can be terraformed, but this will be a huge task, since colonies will be heavy exposed to UV radiation. Only a high-tech radiation shield could work there.

Outer plenets can be terraformed with the help of greenhouse gasses. The main problem is that plants cannot survive when luminosity is below 0.1% of Earth. For Solar System, this is the orbit of Neptune. Plants need both red and blue light, so if you provide them with enough blue and less then 0.01% red, they will die. This will not be a problem for genetically - modified plants, that are able to use ultraviolet light. The following scheme shows the Habitable Zone's outer borders for a star between Rigel and Deneb:

Percents are compared to Earth luminosity.

At 3500 AU, where Earth-like plants can hardly survive, ultraviolet radiation is low enough to allow plants and animals to live on ground during daytime, humans will still need to protect themselves against radiation.

B - type stars have huge habitable zones. The entire Solar System (including many Kuiper Belt Objects) will be too close to terraform. However, a Kuiper belt should be very far from such a star. The outermost limits of the extended habitable zone (11000 AU) are in fact 0.17 light years away! This is closer to the edge of Oort Cloud! Planets could be very far away one from each other, just like Kuiper belt objects and Oort cloud objects are in Solar System. At such huge dimensions, thousands of bodies could exist. Hundreds of them might be terraformed. A system like Deneb or Rigel, with so many worlds, held together into a huge political and economical federation, could be the superpower or the future.