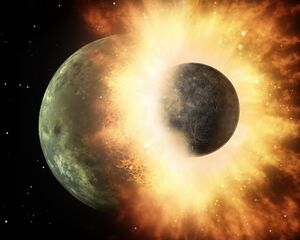 An artificial planet could potentially be created by an advanced civilization. Even if our current technology is unable to create such a thing, we can foresee the benefits of it.

By using various future technologies, it is possible to create a large cosmic object like a planet or a large satellite. There are two methods:

This involves concentrating dust from a large cloud, such as a protoplanetary disk. Current technology is unable to change the orbits of many small-sized particles and space rocks, but some possible methods are:

Could we create a planet from the Asteroid Belt? Unfortunately, the mass of all asteroids is only 4% of that of the Moon ([1]). Other stars might have a larger asteroid belt, massive enough to create a planet. Engineers will have to slowly divert the orbits of all asteroids, so that they can be set on a collision course. The impacts must not be violent because, at their low gravity, asteroids might tear apart instead of creating a larger body. The process will take tens of years but the result will be a larger body, with enough gravity to support an atmosphere.

In the case of planetary rings (such as Saturn's), the problem is different. Rings occur inside the Roche limit, within which any large body will be torn apart by tidal forces. So, even if somehow we collide the particles in a planetary ring together, the newly formed object will not stay in one piece. In order to create a new moon, the matter in the rings must be moved away from the planet.

In many places, there are asteroids, dwarf planets or complex moon systems. These objects might be too small to support an atmosphere on their own. However, if we somehow make them collide, we could create a larger body. For the Solar System, by slowly pushing the moons of gas giants and ice giants, we could create the following (they are my own calculations):

Assuming a composition similar to Earth, the newly created object will initially be a ball of molten lava. Settlers will have to wait millennia for it to cool down, unless technology is used to accelerate the process. If the bodies involved in collision contain too much water ice (like the moons of gas giants and ice giants), this water may be lost during impact (via the impact itself or via evaporation because of the resulting heat).

When temperatures will drop enough, the crust will be thin and fragile. Quakes and volcanos will be frequent. The extreme volcanism will affect the atmosphere and all ecosystems. Terraforming an extremely volcanic planet may be difficult.

The Lack of Matter[edit | edit source]

Retrieved from "https://terraforming.fandom.com/wiki/Artificial_Planet?oldid=7686"
Community content is available under CC-BY-SA unless otherwise noted.